What is a Consortium? - Savings Club

What is a consortium?

According to Investopedia, a consortium is “a group of entities (individuals, companies etc) that collaborate to achieve a common objective.” They do this by pooling their resources together and agreeing to abide by specific terms. Otherwise, they remain totally independent of each other.

Consortiums whose goals are to help individuals make financial purchases are also known as Rotating Savings and Credit Associations (ROSCAs). In a ROSCA, people pool their money together at certain intervals and the full sum is paid out to one member at a time on a rotating basis.

Consortiums are a great way to achieve a goal within a group when you don’t have the resources to reach it individually. They provide an ideal way to save money towards a goal, because it is a system that people can use to save a large sum of money that can’t be easily accessed (so that they can avoid the temptation of using the money for something else) and they can receive full sum needed for their purchase earlier than if they had to wait until they personally saved the full amount.

Informal consortiums are created when individuals within a community pool their financial resources together. This group may be made up of friends, family, neighbors, or colleagues. Each member agrees to pay a set amount of money on a predetermined payment schedule (usually monthly) and then each member gets the full sum that they will contribute on a rotating basis.

These types of informal consortiums, or savings groups, have been in use for a very long time and are quite common all over the world, especially in places where traditional banking is less accessible or when people are distrustful of traditional banking practices. According to MoneyClubber.com, they are known as committees or chit funds in India, “Susus in Southern Africa and the Caribbean, WKUB in Ethiopia, Seettuva in Sri Lanka, Tanomoshi-ko or Mujin in pre-1945 Japan, Tontines in West Africa, Arisan in Indonesia, Wichin Gye in Korea, Xitique in Mozambique and Djanggis in Cameroon, and likelembas in the Democratic Republic of the Congo.” 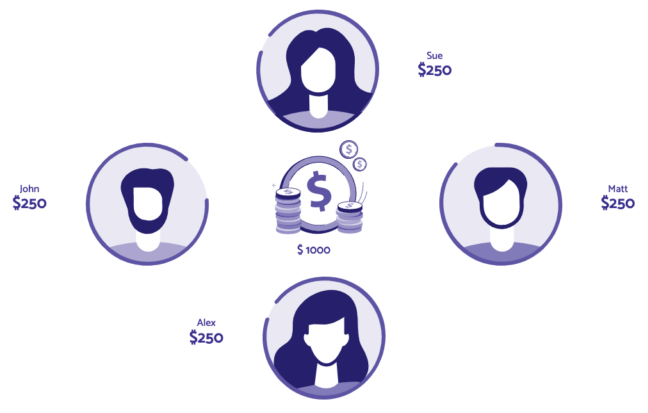 In this example, Sue, Matt, John, and Alex are a group of friends. They all need to make a $1000 purchase some time before July, but do not currently have the full funds available. They meet in February and decide to work together to help each other by pooling their resources. They agree that each person will contribute $250 per month for 4 months (March, April, May, and June) to their common fund. And then each month, the person randomly chosen will receive the full $1000 that they will contribute from the common fund in order to make their purchase. By June, each member will have had access to the resources needed to make their purchase.

The downside of informal consortiums is that they lack legal protections and are limited in size. They rely on an honors system among the group members who often have familial or community ties. If someone stops participating during the process, there is no legal recourse and it can negatively impact the other members of the group.

Formal consortiums are ROSCAs that are administered by a third party company or financial entity. This type of consortium, or “consorcio” as it is also known, was first created in 1961 in Brazil and has since been adopted in many countries. These ROSCAs work in a similar way to informal ones, but a third party administers the group and ensures that it runs efficiently. Since it is administered formally by a third party, a much larger group of individuals can participate and they do not need to be a part of the same community or have any social ties with each other. This allows the group to grow to a much larger size and provides access to a much larger pool of resources. These types of consortiums include an administrative fee that is paid in addition to the monthly common fund contribution and is used towards administrative costs.

Participants in these groups sign a legal agreement to contribute a set amount of money monthly to the group’s common fund for a specific amount of time. Then each month the administrator determines how many group members can receive a letter of credit (or credit voucher) for the full sum based on the amount of money currently in the common fund. By the end of the group term, each member receivers a credit voucher for the full amount. Savings Club is an American example of a formal consortium for buying cars.

There are many benefits of using this type of formal consortium. The administrative fee paid out over the group term is much lower than the interest charged when using traditional financing. These groups are much larger than those that make up informal consortiums and are not tied to a specific location, so the pool of resources that can be accessed is much larger and can give you more buying power. Contributions can be used to build credit history and improve your overall credit health. Finally, having the group administered by a neutral third party provides safety and security for the group participants.

Consortiums are a great way to work with other people to achieve your financial goals while avoiding the additional fees and interest charges charged by traditional financing. Want to learn more? Check out Savings Club and today and see how we can help you stop dreaming and start saving!